A Little Bit of Planning...

I had an epiphany yesterday while working on a “weekend project” that’s taken several months. You see, there are no more real weekend projects in our home since we had our second son. My wife and I are lucky to get five minutes to ourselves on any given day, which is more than fine since we love our boys and love hanging out with them. But it sure makes it tough to indulge our DIY tendencies. For the past few months we’ve been converting the closet in our front hallway from they typical sliding-door, hide-yer-shit closet to a built-in locker. We’re doing this because when given a place to hide stuff, we will fill it with all kinds of unnecessary stuff. It clutters our lives, weighs us down and leaves us feeling overrun by… well, stuff.

Anyhow, here’s a picture of what we’re working on: 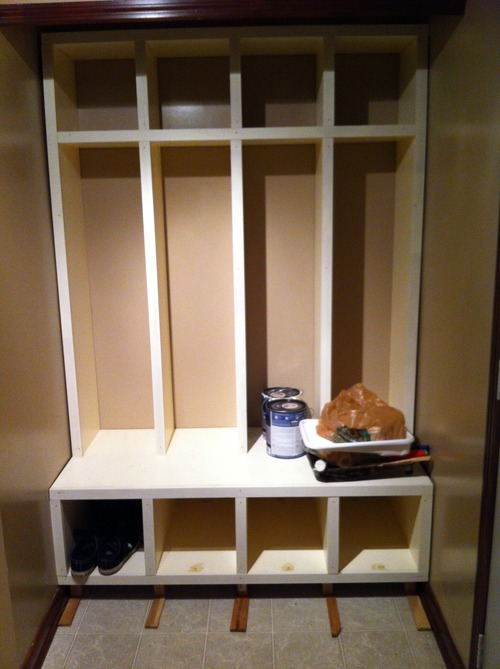 There’s still a lot to do—fill nail holes, paint, put a kick-plate on, etc—but you get the idea of what we’re going for. We’ll each have limited space for our coats, bags, etc., and it’s all out in the open which, in theory, will help us keep our stuff organized and to a minimum.

Yesterday I went to put the trim on… trim that I cut two or three weekends ago. I took a look at the thing yesterday, decided how I wanted the pieces, and went to the garage only to find out what I thought I was going to do wasn’t possible. Or even right. You see, the me from the past left myself a plan, and it made my day yesterday go smoother. I didn’t have to do much thinking. The pieces were cut and I had several index cards outlining what I needed to do with them. The work was hard, but the thinking wasn’t necessary. I’d already gone through the thought process and could focus on fitting the boards by hand, getting the nails in right place, and keeping my two year old from learning new curse words when I smash my thumb.

I have stacks of index cards around the house. I use them liberally when working on home projects—always have. They’re quick and easy, and they stash well with materials. The biggest project my wife and I did—rebuilding our back porch—took nearly a year, and that was before we had kids. But it went smoothly because we planned it, noted it, and left clues all over on what we needed to do next. At any point we could walk away from the project for days or weeks, then come back and know pretty much exactly what we needed to do next.

What’s this have to do with writing? Well, seems I haven’t quite learned my lesson when it comes to planning. I’m about 3/4 of the way through the first draft on a novel and I’m stuck. I have titles for the remaining chapters, and a little bit roughed in on a couple of them, but it’s not enough. At one point I knew how the story would end, but I didn’t leave myself enough clues. I’m ashamed to admit it but I have to rethink the whole thing, not because it’s not working but because I didn’t leave myself enough clues.

I had the same problem when I was working on Tearstone. I reached a point where I had about 100 pages of draft left to write and I couldn’t see the structure anymore. I couldn’t tell where the story was going. I’d been in the details for so long I couldn’t see the big picture.

After floundering around and battling feelings of doubt and insecurity I finally forced myself to sit down with—you guessed it—a stack of index cards. I set aside the word processor and focused only on structure. In a few days I had the whole thing sorted out again. I had a plan. And I finished the draft without any more major issues.

I’m back at that same point and I’m kicking myself for not having learned the lesson the first time. I’m not saying every detail of a novel needs planned out ahead of time, every character trait and every scene, but having the structure and sequence of events mapped out makes life so much easier. The kind of thinking that goes into writing a scene is different from the kind of thinking needed to tie the scenes together (at least for me), and it’s tough to build a novel’s structure when I’m trying to write prose will draw a reader on.

I’m setting aside the word process for a few days, maybe even the week if necessary, and I’m pulling out the index cards. I’m sitting down and capturing the novel’s structure in such a way I won’t have to think about it, or even remember it, so I can later sit down and get caught up in the moment. For me that’s where most of the fun is.

If asked, I’ll say I hate planning. I loathe it. I don’t want to feel like I’m boxed in and left without choices. But the reality is I do it. Even at the day job I keep index cards handy. I have a to-do list. I capture all that high-level stuff so I don’t have to think about it if I don’t want to. I’m off now to work on the novel, and I’m not going to write a word. Instead, I’m going to plan the rest of the thing out. And hopefully on my next major project I’ll remember to invest the time up front in planning so I don’t have to juggle so many choices while I’m pounding away at the keyboard.

So long, and remember…